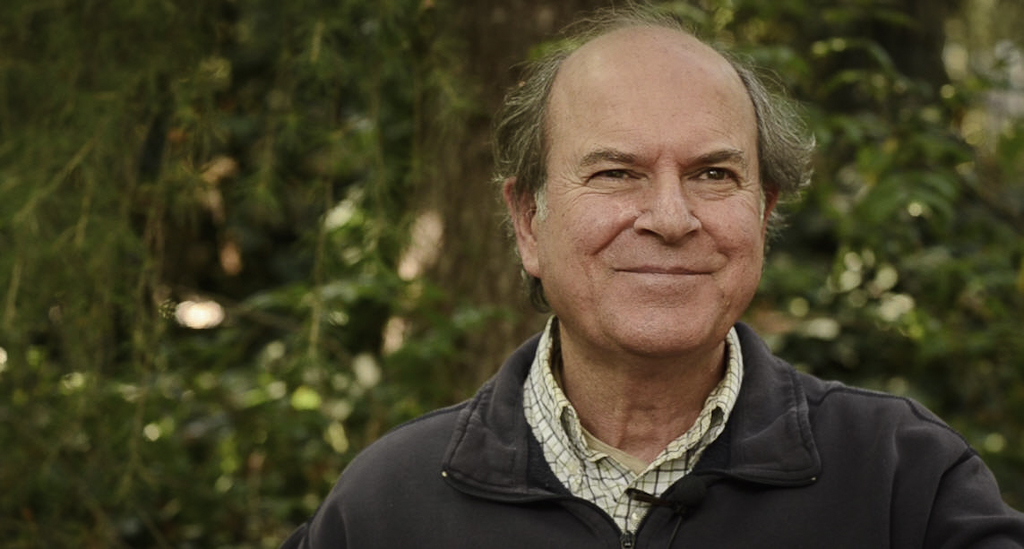 Saturday, Jan 11, 2020 (tomorrow) will be the Life Celebration for our great friend and natural farming mentor, Larry Korn. Though Hailey and I are currently on a beach in Baja and unable to attend the celebration in person, I have submitted this letter in gratitude for Larry-San, and his influence in our own path of life. Lia, to whom the letter is addressed, is Larry’s daughter and is hosting the event and celebration.

We offer this letter to our own farm family and friends, in the spirit of celebrating Larry’s life and mission, and to share with all, the impact he has had in the beginnings, and unfolding, of Ananda Farm, on Camano Island. With great gratitude and friendship to Larry-San, viva la revolucion!

Sending greetings and blessings to all who gather in celebration of dear friend and teacher, Larry Korn. I wish I could be there to see everyone, and especially to hear the sharing about our great friend-in-Larry. Through this letter, I submit my own humble testimony to the impact of Larry in my life.

7 years ago now, in Dec, 2012, my wife Hailey and I embarked on creating a community natural farm on Camano Island in Washington state. This came on the heels of our discovery of the book One Straw Revolution, whilst living in the bosom of Nature in the Central Sierra Mountains of California. We often joke, though seriously, that One Straw was both our first farming book, and also our last, as it also released us from feeling any need or desire to read any more books about farming. Then, of course, Larry put out more books!

The amazing thing about One Straw, we realized: this is not a book about farming – this is Revelation, about Life itself, and our true purpose as people on this planet. Prior to returning to Nature ourselves, and realizing this apparent revolution founded upon a single strand of straw, neither of us had ever considered a path of agriculture, much less a ‘natural life.’ One Straw changed everything. It awakened seeds in us, long dormant, but now ready for germination.

As for Larry – he was the channel through which Fukuoka and natural farming came to the West and my own life. In his first visit to our farm in 2014, he shared his experience with us of an actual vision he had as a young man while traveling in Japan – one which, to my knowledge, he rarely shared with the public. In it, he was shown Fukuoka-Sensei and the manuscript that was to be given him, well before he had ever met Fukuoka or heard of One Straw. He went on to recount that upon arriving at Fukuoka’s farm, it took many months for the manuscript to actually present itself. While there were already a few of Fukuoka’s books in circulation among those living at his farm, none of them were the one. Then, as I recall him saying, one day Fukuoka emerged victoriously (I imagine from his hut!) with One Straw in his hands. Larry expressed his knowing, that is the one.

Hearing him share this account of his vision and a foreknowledge of his own destiny, awakened in me anew, the cosmic nature of their relationship and shared dharma. I share it now in offering for us all, the truly divine nature of Larry and his service to this, our world.

We first met Larry in person at the Permaculture Convergence in Forest Grove, Oregon, 2013. It was the first time I heard him speak, and his emphasis was shockingly, on the difference between natural farming and permaculture. Music to my ears!

I asked Larry in the class that day, whence he began taking questions following his somewhat controversial statements (we were at a permaculture convergence, after all!): “Would you say that despite the outward differences in approach, permaculture and natural farming lead to the same place?” His response was not any more filtered. “No, they are not the same, and they do not lead to the same place.”

It was all rather thrilling for me, to grow deeper in this do-nothing principle. Natural Farming is not about our control, or understanding, or design of Nature, into some permanent system; it is about us realizing our own inherent Oneness with Nature, with Life itself. What freedom! What joy! – to take up the path of farming, without the need to plan, or figure it all out. To simply let Nature be our friend and guide, and us, Her simple servant. This was Larry’s promise, through Fukuoka, and ultimately, through all of our own open hearts, and faith, in the divine design of Nature herself. This has been how we have aspired to grow our own farm and lives, thanks to Larry.

Larry as a personal friend was thoughtful, kind and always full of jokes. Some of them we caught; some of them we missed entirely, or forgot to laugh, which he had no inhibitions telling us about!

Though I never met Fukuoka, Larry reminded me of him. I remember distinctly, the first trip when he visited the farm, as he pulled up our driveway to the farmhouse in his little black pick-up truck, he actually looked like Fukuoka; I told him as much, and he said he had been told that before. It was more energetic than physical, though certainly they cultivated a similar hair style.

While with us, he would awaken in the morning, quietly slip outside as we were gathered in sadhana (group meditation), and walk the farm – much as I would imagine Fukuoka would have done. He would later report to me the different ground covers, trees, herbs, and life that he observed throughout the farm.

Over the years, Larry took us in, both literally, and figuratively, as he did for so many aspiring natural farmers all over the world. Often he would send us postcard updates from his various travels – Ireland and Micronesia, to name two. I had mailed him a postcard from Hannibal, Missouri, the hometown of Mark Twain, around the same week he left this earth plain. I wonder if he received it.

He told us as recently as this summer – ‘my job is to build community.’ He just didn’t want to do it through institutions, or formalities; it must always be, the natural way.

Last winter, when we were driving from Washington en route to our favorite beach in the Baja, we had the interesting experience of our car breaking down in Medford – right before Christmas! After one rather frigid Friday night in a mechanic’s parking lot (Lockwood’s Automotive), we realized Ashland was only a few miles away. As we thawed out in the morning sun, we messaged Larry to see if he was available to meet up for tea. He messaged back that he could come pick us up, and would happily take us in. An incredible turn of events!

Though entirely unexpected, we spent 5 days and nights with him, including Christmas, while our car was being repaired (by Todd, a Christmas angel, no doubt). And though Larry didn’t celebrate, as he was Jewish, he was a good-enough sport to allow us hang up a stocking at the hearth, and play a nature-sounds Christmas CD a dozen or more times in his incredibly zen living room.

The remarkable circumstance of that week with him was not lost on us at the time, and especially not in this moment of reflection. During the week we shared at least one meal, and a couple hours around the table each day – asking questions, laughing, and listening to stories about his life, and also his time with Fukuoka sensei. In between our Larry ‘satsangs,’ we enjoyed a merry Christmas in Ashland: ice skating in Lithia park, window shopping on the Main Street, visiting the movie theatre and the food coop. It felt a bit like a Christmas miracle, as we were now totally free from all plans, and staying with one of our real-life heroes, suddenly and without any foresight at all. I count that time as one of the great blessings of this life: When life slows down and worldly cares fall away, and we truly learn how to live as natural people again.

And though we had already discussed prior with Larry the idea of hosting a natural farming workshop at our farm in the upcoming 2019 season, this unscripted week together in Ashland did much to solidify those plans. In September of this year, Larry arrived to lead a natural farming workshop with ‘co-conspirators’ and ‘one-straw revolutionaries’ joining us from as far as Boston and New York and New Mexico, as well as inspired elders, and Larry’s peers, like Sam Benowitz and Mike Maki.

Watching and listening to him over the course of the week in the workshop was truly a joy. He told stories, listened so attentively, and helped each and every person feel welcome and a critical member of the revolution – as we certainly all are, but can so easily forget.

During the week, I had the chance to bring him to one of our local farmer’s markets. It was so sweet how he made an effort to connect and befriend countless vendors, farmers, and patrons, without ever once mentioning himself or who he was. Other farmers, who I thought should be honored to shake his hand and meet him, left simply thinking, here is a nice, joyful fellow. Indeed, that was true as well.

At our home-court market on Camano Island, he lead the group in a public demonstration of seed balls. For me, it felt like a hero’s homecoming and some kind of frozen moment in time. We concluded the week with a ceremonial seed ball toss in the alpaca-land orchards, atop sunset hill. He told most all of us during the course of the week, it was his favorite workshop ever, because it was on an actual natural farm, with a small community of natural farmers. For us, it was an honor and incredible blessing, which I imagined would continue for years to come.

In the last days of the workshop, he shared with me his own 5 year cycles. First, 5 years of writing and editing: the Fukuoka classic, Sowing Seeds in the Desert, and then, his own tribute and unique contribution to the evolution of agriculture, One Straw Revolutionary, as well as Mary Reynold’s spiritually-inspired: The Garden Awakening. Then, a 5 year cycle of traveling, teaching, and sharing. From this, he was not sure exactly what was next; only that it would be a new and different cycle to come. In this context I had the honor and pleasure to even invite him to live at the farm on Camano. His beatific smile was satisfaction enough for both of us.

To flash forward to today, it is quite surreal that he is gone from this side of life. It felt like it was still the beginning, and that he was so full of life. When I reflect on all the gifts that he has shared with all of us, they are immense; and they always came from him simply being his true, natural self. What better example can one set in this world?

Ultimately, it is wonderful to know that Larry did that which was his to do in this life. He accomplished his mission. He fulfilled his dharma. And now, he is soaring free.

Sending love, gratitude and friendship to you Larry, now and ever more. And love and condolences to all friends-in-Larry, everywhere.