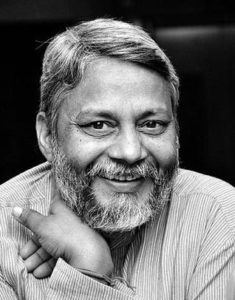 It has been over two months since a surprise encounter with Rajendra Singh, but time has done little to dim the inspiration of that meeting.

On Thursday, May 2, of this year, Hailey and I arrived in Port Townsend, WA for the Global Earth Repair Conference, a gathering of a few hundred well-intentioned, Mother-Earth loving souls from all over the world, to discuss, share, and hopefully inspire each other in the effort towards healing the earth.

That evening, as we were setting up our Ananda farm table in the main hall, an Indian man walked over to introduce himself. The hall was mostly empty, save a couple volunteers doing final preparations for the event set to begin in the morning.

“Rajendra Singh,” he introduced himself to us. He and a friend were trying to find his accommodations for the night, as he had apparently just arrived, from India. We spoke briefly, and cordially. He asked us what we farmed. And then he parted, with my own interest piqued. Who is this kind, happy, and royal Indian fellow?

When we got back to our room late in the evening, I checked the schedule for the weekend. He was speaking all 3 days. I checked the google: Rajendra Singh, “The Water Man of India.” With three days of talks ahead of us, I thenceforth decided to listen to him as often as I could while I had this unexpected opportunity.

Rajendra’s 1st talk began by telling his own story:

In the 1980’s, Rajendra was a young man in his twenties. A new medical doctor with a practice in a remote village in Rajasthan, the driest state in all of India on the Pakistan border. An episode here found many villagers losing their eye site. Issuing medication to his, and the surrounding, villages, he was able to help about 7% of his people to improve their failing vision. Not exactly inspiring results!

Yet, of that 7%, one was an old sadhu that lived in the hills. And, when the man regained his vision, he was shocked to see his home with fresh eyes. It had become a desert.

“Rajendra,” he addressed the young doctor. “You are no longer to be a doctor for people. They have created this! From henceforth, you are to be a medical doctor for Mother Earth. She has a very high fever, and you must bring it down.”

And with this interaction – a student had found his teacher. A devotee of Mother Earth, his dharma.

This sadhu and teacher – whom Rajendra shared with us a very sweet picture of, swimming in a river – took Rajendra up into the hills one day. He had him drop a bucket in a well. When the student pulled it up, teacher asked, “What do you see?” “No Water,” Rajendra replied. “Why?”

That is the question.

The next day he took him to another well. Had him drop the bucket. Water. ‘Why?”

Around the well, and at this location, trees, and vegetation still existed. Where there was life, there was still water.

“In two days, I received my PHD for Mother Earth.”

This was still the 1980’s, and young Rajendra’s mission was just beginning. Now talking to us as a teacher and global inspiration in 2019, he filled in the details along the way.

Over 250,000 wells that no longer held water, now pump water again, in some many thousands of remote villages throughout the region.

It took 17 years for the first dry river bed to start flowing again. And so too, now, more than 10 other rivers, that had gone completely dry.

Of all the personalities I have come across in the permaculture, natural farming, and earth restoration movements – none that I am aware have had such an immediate impact as has Rajendra.

The question we all wondered – how did you do it? How did you bring water, and rain, back to the desert?

What is the solution?

Rajendra’s English is not great; at times, it is even very difficult to understand.  Spontaneously he would switch back to his native tongue, and beautifully regale us with words that were indeed, impossible to understand! But that is only the outward language. The feeling, the vibration that he shares, is unmistakable.

Rajendra told us that as he began working in the villages to help restore the water – he often has come across many road blocks along the way. The “Mafia” he said, are always trying to get their hand in the pie, especially once the water starts flowing again.

“You know who the mafia is? Nestle. Pepsi. Coca Cola.The Government!” All those institutions that want the power, the water rights, from people and places all over the world. That is the real mafia, in Rajendra’s world.

Thus began a 10 minute education, stating exactly what we are up against at this moment in time. What is happening right now throughout the world, environmentally speaking; all the forces at work contributing to this rather dire predicament.

Yet, amidst all this doom, Rajendra didn’t seem glum. There was a spark simmering; he was building up towards something.

Seemingly all at once, ratcheting up in volume and intensity, in a booming yet melodic voice, he asked us, “Do YOU KNOW WHAT THE SOLUTION IS?” The solution, to the incredible mess we find ourselves in.

And then again, now with his hands placed firmly on his waste, elbows out to the side, and chest puffed open, “Do you knooow what the solution is?”

Speechless, we waited in silent anticipation. No one dared try to answer!

With a sparkle in his eyes, and now speaking in a tiny, high-pitched voice, he stated ever so sweetly: “The solution is Love.” He not only spake the words; he became them. And in so doing, sent them to everyone in the room. Joy filled the air.

The Solution. Is. Love.

Efforts at discussing the outward techniques for bringing rain and water back to expanding deserts were met with Rajendra’s giggles, or simple responses; not quite satisfying to all the western minds in the room. Yet, for those of a heart-nature, the responses he shared were all that was needed in those moments. Only Love can heal this world. Nothing else will do. This was not only the message he stated, it is the very essence of his being. It glimmered in his eyes; and shined forth brightly in his smile.

A person asked, “how have you been able to do so much work in so many villages and with so many villagers?” Many an ambitious permaculture designer has failed in their attempts to ‘help’ the simple villagers to change their ways!

“By helping them to know, it is they who are doing it; not me.”

Thus began a final highlight in the beautiful seeds Rajendra sowed in us that weekend in May.

His rules were simple: No machines; no government agencies; no monied interests at all. As soon as outside motivations get involved, the mission changes, and does not work. It must come from within the people, from within their own hearts and with their own hands doing the work. That is how they will truly change themselves and thus the circumstance. 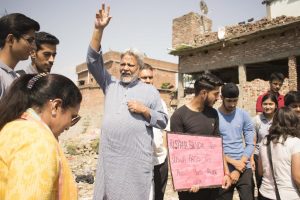 On a practical level – this involved shovels, rocks, sweat, soil, seeds, trees, lots of hard work. And yet, Rajendra let us know again – when the people do it themselves, they know exactly what has happened, because they have done it. When the machines come in; when the monied interests get involved – the project inevitably fails, because either the people didn’t commit to the change in themselves, or the monied interest monetizes the resources and takes the freedom from the people themselves.

At one point Rajendra had over 300 charges against him from the Indian government for his efforts in restoring Nature and water in his homeland. It boiled all the way up into their high court. Here, before a single judge of good nature, all the charges were thrown out at once.

“Since then, I only listen to God’s Laws, never to man’s.”

On Sunday as we were now packing up our farm tables, I had reflected a lot already about Rajendra; to say he was the highlight of the conference for me, would be an understatement.

It was a great delight then, when he walked up to our table again – this time to say goodbye. He walked up, just as before – shook our hands, and examined again our farm products, our display, and all the various plant starts we were selling.

He looked at the plants and said, “They are very happy, do you know why?”

He pointed at his heart. “Love.”